San Diego View Art Now was from a grant for the DNA of Creativity  in 2013.

Goal: The goal of this project was  to invent interactive programming available on mobile phones, which combines art and science ideas to encourage participation in various services or projects. One example service would be to visually see on a map with GPS capability the location of art events that are close to your current location. Another might be accessing more information about those events visually through Augmented Reality (AR). AR is a term that refers to technology that superimposes computer-generated content over live images viewed through cell phone cameras. Ultimately, gathering and accessing information about the use of phones in this way might inform other uses.
DNA of Creativity at Oceanside Museum of Art
April 12 to August 7, 2014, Tuesday to Sat 10 to 4 pm, Sunday 1 to 4 pm
Opening reception: Sat. April 12, 6-8 pm
704 Pier View Way Oceanside, 92054
More info Patricia Frischer 760.943.0148: Danielle Susalla 760.435.3721
More info: patricia@sdvisualarts.net 760.943.0148
VIEW OUR DNA OF CREATIVITY CATALOG


San Diego Visual Arts Network is fusing the energies of SD Arts and Science communities to promote understanding and new ways to view the world and has  produced a series of projects, which will enhance the viewing public’s perception of creativity and its role in our lives.

DNA of Creativity at the Oceanside Museum of Art
Workshops and seminars held at  OMA:
Sea Changes: Act -  Sunday, April 27, 1 to 5 pm, interactive art project during the Earth Day Festival/Oceanside Days of Art

PAMM and DNA of Creativity - Tuesday, June 17, 7- 8:30pm, DNA of Creativity PechaKucha Lecture with 1-2 artists from each team. The lecture will begin and end with a PAMM microtonal performance and Photoscopia demonstration.

DNA of Creativity at RED
Saturday, April 26 at 7:00 pm.
a special FREE presentation before the 8PM performance
San Diego REPertory Theatre
at the Lyceum 79 Horton Plaza, SD, 92101
Delve more deeply into the motivations of Rothko by exploring what happens when the Rorschach inkblot test meets giant Zen brush painting techniques of Rosemary KimBal. This is a hands-on opportunity. to learn about the DNA of Creativity in a PechaKucha format with SD View Art Now - Patricia Frischer, Sea Changes: Act - Kira Corser, Urban Succession - Jason Rogalski and PAMM - PolyAesthetic Mapping: The Muses - Kaz Maslanka. Stay for the evening performance and SDVAN (the non profit producer of DNA of Creativity) will receive a $10 donation for each standard or premium seat sold. Please enter this code: SDVAN which can be used online, over the phone 619.231.4304 and at the box office 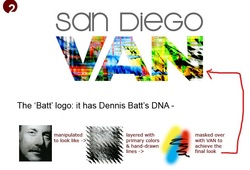 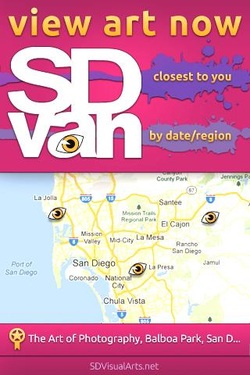 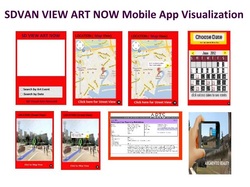 This visualization is about the 7th version of our plans to imagine the interface of the app with the public.

The eighth version made by Fei Zhou appears below.